UNAM-Canadá's main activities revolve around language courses (Spanish, English and French) and courses on Mexican and Latin American culture. More than 800 students attend UNAM-Canadá every year. By building partnerships between Canadian universities and UNAM's different departments, the institution aims at promoting academic exchange and joint research projects. The school also hosts conferences, lectures, discussion panels, book and movie presentations, art and photography exhibitions, concerts, plays and dance nights and organizes literary evenings in its library. The building has several classrooms, a library specialized on Mexican themes, a cafeteria, and a multipurpose room used as an auditorium and gallery. 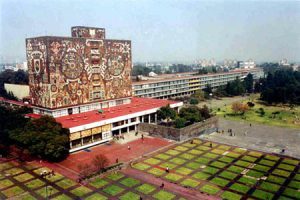 Founded in 1551 in Mexico City, the University of Mexico is one of the oldest in the continent. In 1910 it acquired its national character, and in 1929 it was granted autonomy that ensured independence in decision making and freedom of teaching and research. For its current number of students, teachers, courses offered and organized events, it is also the largest in America. UNAM is the largest cultural project in the history of Mexico, and is distinguished by its public, secular, and gratuitous nature. UNAM develops cultural and educational activities in the areas of science and humanities, and much of the country’s scientific investigations and researches are conducted at UNAM by its academics. UNAM publishes a daily average of six books that are the product of the own work of its researchers and cover subject areas of research, teaching, and cultural extension. It is the only Mexican university that counts among its alumni Nobel prizes winners. In 2007 it was ranked the best Spanish-speaking University in the world by the Times Higher Education Ranking, and its campus in Mexico City was declared Cultural Heritage of Humanity by the UNESCO. In 2009 it received the Prince of Asturias Award for Communication and Humanities.